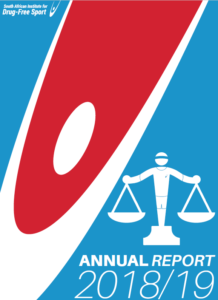 The South African Institute for Drug-Free Sport (SAIDS) annual report has revealed that it tested 1,584 athletes during 2018/19 year and there were 47 anti-doping rule violations (ADRVs), and three additional cases pending (total of 50 cases). It also outlines how a partnership with the Hawks – South Africa’s Directorate for Priority Crime Investigation – led to prosecutions of two athletes for trafficking and tampering with doping control processes.

The 1,584 tests represent a decline from the 1,659 in 2017/18, but SAIDS CEO Khalid Galant explained that this is an ‘ongoing trend as our test distribution plan becomes increasingly targeted and risk-based, rather than random’. There were 46 ADRVs in 2017/18.

The most tested sport during 2018/19 was athletics with 427, followed by rugby with 342. Rugby had the most ADRVs with 16 – including six schoolboys who were among those tested at the annual Craven Week interprovincial rugby tournament. All six boys tested positive for anabolic steroids. Their names have not been made public as they are minors.  Galant expressed concern at the number of ADRVs at schoolboy-level and pointed to a ‘high tolerance by parents and coaches to doping practices’.

Bodybuilding has the next highest number of ADRVs at 10.   The most common substances found in the tests were anabolic agents (27), hormone and metabolic modulators, cannabinoids and stimulants.

During the reporting period SAIDS achieved success in prosecuting five cases that were not based on testing but through investigations. These covered such offences as trafficking and tampering with the testing process, analysis of an athlete’s biological passport (ABP) and refusal or evasion of testing.  Working with the Hawks, SAIDS was able to gather substantial evidence against South African cyclist Shan Wilson and distance runner Mamorallo Tjoka from Lesotho, who competes in South Africa, which revealed fraudulent activity designed to undermine and evade doping controls.  Wilson was banned for six years and his fifth place in the 2018 Cape Epic Grand Masters category was expunged. Charges against him included tampering with the doping control process and ‘trafficking or attempted trafficking in any prohibited substance’.  Tjoka’s offence was the second in a 10-year period and she was banned for eight years. Athletics SA was ordered to expunge Tjoka’s records in several races and recover prize money. This included R250,000 for placing second in the women’s category at the Two Oceans Marathon.

The successful ABP prosecution was against professional mountain biker Max Knox. The World Anti-Doping Agency (WADA) explains that ‘the fundamental principle of the ABP is to monitor selected biological variables over time that indirectly reveal the effects of doping rather than attempting to detect the doping substance or method itself’.  Knox was unable to explain anomalies in his blood profile that indicated doping to enhance his aerobic capacity. He was banned for four years.  Galant said the investigations were triggered in significant part by whistleblowers. ‘We are very grateful for their efforts to keep sport clean … we do take tip-offs about any sporting discipline or individuals seriously and encourage people with good information to come forward to us,’ he added.

* Last year Galant wrote to school rugby tournament organisers explaining the SAIDS Clean School Sport Policy, in terms of which ‘anti-doping detection, deterrence and prevention strategies will be extended to include in-competition testing at selected school sports events and tournaments’. This was undertaken in collaboration with the SA Schools Rugby Association and supported by the SA Rugby Union and the Department of Sports and Recreation. Galant pointed out in the letter that anti-doping education was an integral part of the policy.  In 2018/19 period SAIDS conducted 112 anti-doping education events – a  summary of the stats are provided in the info-graphic below: 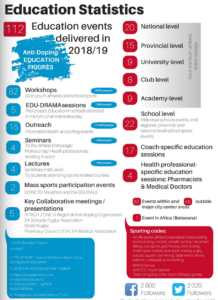 To view the Annual Report, please click on: http://online.anyflip.com/eaxzg/qojv/mobile/index.html